Episode 1 of Fruitnet Insights, a new video series for the fresh produce sector,·focuses on the fresh avocado business (15 September). 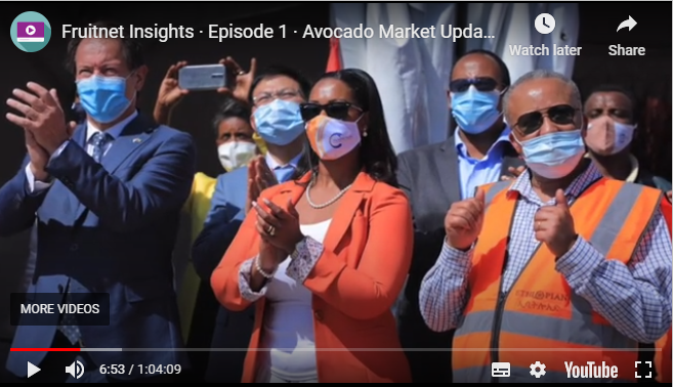 It discusses market trends, opportunities for growth and commercial challenges. It also provides an update on the first consignments of Ethiopian avocado to Europe via rail, as well as impacts of Covid-19 on Peruvian production, among other topics.

In week 40, the export of Peruvian avocados is falling and the end of the season is also in sight for countries such as South Africa, Kenya and the US (California) (Fresh Plaza, 2 October). The market is now shifting to other producing countries, such as Colombia, Spain, Italy and the undisputed powerhouse in avocado production: Mexico. The European market is currently tight, so the price has risen. This is especially true for the small and medium sizes. However, prices are still below those of 2019. The report covers all European and global markets; the sections on ACP producers are summarised below.

The most common avocados in the Dominican Republic are the green-skinned, which are currently marketed by the country as tropical avocados in hopes of expanding its presence in the US market. September was marked by the start of the harvest of the Semil-34 variety, the most popular due to its long shelf life.

South Africa’s export season is already at 95% completion, and it has been a difficult year due to the lockdown. The sales of the early greenskin avocados in particular were hit hard by the loss of the food service channel.

Colombia, the Dominican Republic, the Philippines and the USA have recently been authorised to export to the Chinese market. The number of ripening facilities in China is still limited, but also increasing, and there is even local cultivation in the South Chinese province of Yunnan.

Egypt: a player in the sweet potato market

Currently there is a good supply of sweet potatoes in the UK and Europe; old-season USA production, new-season Spanish production, and Egyptian produce are all available with varying quality and prices (Fresh Plaza, 25 September). “Egypt is a real player in the sweet potato market now, with quality production of Beauregard variety available from the right growers,” according to Ian Crispin, Commercial Director at Pacific Produce Ltd. The company imports sweet potatoes from Honduras for 9–10 months of the year, and after experimenting with a number of Egyptian exporters they believe they have found the right partner, with the right quality, to complement their Honduran supply.

Drought in Peru could impact the 2020/21 mango season

Peru could export around 200,000 tons of mango in the 2020/2021 campaign, which begins in November, according to the manager of the Peruvian Association of Mango Producers and Exporters (Fresh Plaza, 30 September). This volume would be much lower than the record 234,000 tons exported in the previous season and cannot be completely explained by the alternation in production, which is not expected to be very strong. Drought is also a factor, with reservoirs reaching historical minimum levels and a lack of rain on the Peruvian coast that could affect all the crops on the coast, including mango.

Apart from the 2 million tonnes of citrus expected to be exported in 2020 by the South African citrus industry, a further 500,000 tonnes is forecast for the next 3–5 years (Fresh Plaza, 29 September reporting on Business Day, 28 September). An additional R6.8 billion (€340 million) in foreign exchange earnings and 2,250 sustainable jobs are predicted in growth projections for soft citrus, lemons and Valencias over the next 3 years. But if the industry fails to expand its access into overseas markets over the next few years, it runs the risk of an oversupply of the region’s exports, resulting in lower prices. That is why citrus industry experts have been working on gaining entry into the Philippines for the past 11 years; an effort that is now bearing fruit. There is now a green light to export to the country, after the recent signing of a workplan between the Department of Agriculture, Land Reform & Rural Development and the Philippines Bureau of Plant and Industry. This new market presents an export potential of 20,000 tonnes of citrus and export earnings of about R205 million annually. It would be a great positive to also gain re-entry to the key market of Vietnam.

Despite the negative effects of Covid-19 on Peruvian agricultural exports, ginger has experienced spectacular growth (Fresh Plaza, 7 October). In 2019, FOB Peruvian ginger exports totaled $41.5 million; between January and July of this year, the country’s ginger exports amount to $36 million dollars. There were fewer shipments in April, but they increased in the following months. Susana Yturry, the manager of agro-exports of the Association of exporters (Adex), said this increase happened because China, the main world exporter of ginger, stopped making shipments to the European and US markets. According to data from Adex, in the first seven months of the year, ginger shipments to the USA increased in value by 109%, while shipments to the Netherlands increased by 148%, exports to Spain grew by 102%, to Germany by 256%, Italy (137%), Brazil (1,705 %), France (193%), Argentina (129%), and Ecuador (314%). In addition, the country opened 14 new export markets and now exports this product to 29 destinations. The most significant were Russia, South Korea, and the Dominican Republic. The country only stopped exporting to Panama and Taiwan.

A start-up based at the University of Hannover in Germany is making paper from pineapple crowns under the name “Musa Fibra” (Fresh Plaza, 28 September). The developing company now has a new name – eco:fibr – and is planning to upscale by building a factory in Costa Rica, as the waste produced in pineapple cultivation is a big problem there. The longer term aim is to recycle other waste from the food sector, as well as pineapple waste, to alternative pulp.